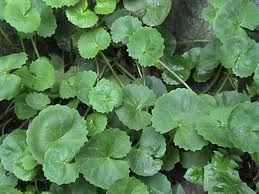 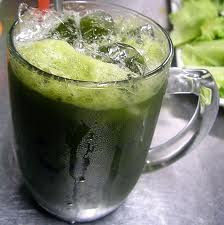 Centella asiatica, commonly centella is a small, herbaceous, annual plant of the family Mackinlayaceae or subfamily Mackinlayoideae of family Apiaceae, and is native to , , northern , , , , , , and other parts of . It is used as a famous wild vegetable and as a medicinal herb in Ayurvedic medicine, traditional African medicine, and traditional Chinese medicine. Botanical synonyms include Hydrocotyle asiatica L. and Trisanthus cochinchinensis (Lour.).

The stems are slender, creeping stolons, green to reddish-green in color, connecting plants to each other. It has long-stalked, green, reniform leaves with rounded apices which have smooth texture with palmately netted veins. The leaves are borne on pericladial petioles, around 2 cm. The rootstock consists of rhizomes, growing vertically down. They are creamish in color and covered with root hairs.
The flowers are pinkish to red in color, born in small, rounded bunches (umbels) near the surface of the soil. Each flower is partly enclosed in two green bracts. The hermaphrodite flowers are minute in size (less than 3 mm), with 5-6 corolla lobes per flower. Each flower bears five stamens and two styles. The fruit are densely reticulate, distinguishing it from species of Hydrocotyle which have smooth, ribbed or warty fruit.
The crop matures in three months, and the whole plant, including the roots, is harvested manually.

Centella grows along ditches and in low, wet areas. In Indian and Southeast Asian centella, the plant frequently suffers from high levels of bacterial contamination, possibly from having been harvested from sewage ditches. Because the plant is aquatic, it is especially sensitive to pollutants in the water, which are easily incorporated into the plant.

Centella is used as a leafy green in Sri Lankan cuisine, where it is called gotu kola. In Sinhalese gotu is translated as "conical shape" and kola as "leaf". It is most often prepared as malluma , a traditional accompaniment to rice and curry, and goes especially well with vegetarian dishes, such as dhal, and jackfruit or pumpkin curry. It is considered quite nutritious. In addition to finely chopped gotu kola, malluma almost always contains grated coconut, and may also contain finely chopped green chilis, chili powder, turmeric powder and lime (or lemon) juice. A variation of the nutritious porridge known as kola kenda is also made with gotu kola by the Sinhalese people of . Kola Kenda is made with very well-boiled red rice (with extra liquid), coconut milk and gotu kola, which is pureed. The porridge is accompanied with jaggery for sweetness. Centella leaves are also used in sweet "pennywort" drinks.
In , the leaves are used for sambai oi peuga-ga, an Aceh type of salad, and is also mixed into asinan in .
In  and , this leaf is used for preparing a drink or can be eaten in raw form in salads or cold rolls. In , vendors in the famous Jatujak Market sell it alongside coconut, roselle, crysanthemum, orange and other health drinks.
In Malay cuisine the leaves of this plant are used for ulam, a type of Malay salad.
It is one of the constituents of the Indian summer drink thandaayyee.

Centella is a mild adaptogen, is mildly antibacterial, antiviral, anti-inflammatory, antiulcerogenic, anxiolytic, nervine and vulnerary, and can act as a a cerebral tonic, a circulatory stimulant, and a diuretic.
Centella asiatica may be useful in the treatment of anxiety, and may be a promising anxiolytic agent in the future.
In , tisanes of the leaves are used as an afternoon stimulant. A decoction of juice from the leaves is thought to relieve hypertension. A poultice of the leaves is also used to treat open sores.
Richard Lucas claimed in a book published in 1966 (second edition in 1979) that a subspecies "Hydrocotyle asiatica minor" allegedly from Sri Lanka also called fo ti tieng, contained a longevity factor called 'youth Vitamin X' said to be 'a tonic for the brain and endocrine glands' and maintained that extracts of the plant help circulation and skin problems. However according to medicinal herbalist Michael Moore, it appears that there is no such subspecies and no Vitamin X is known to exist.
Several scientific reports have documented Centella asiatica's ability to aid wound healing which is responsible for its traditional use in leprosy. Upon treatment with Centella asiatica, maturation of the scar is stimulated by the production of type I collagen. The treatment also results in a marked decrease in inflammatory reaction and myofibroblast production.
The isolated steroids from the plant also have been used to treat leprosy. In addition, preliminary evidence suggests that it may have nootropic effects. Centella asiatica is used to revitalize the brain and nervous system, increase attention span and concentration, and combat aging. Centella asiatica also has antioxidant properties. It works for venous insufficiency. It is used in for opium detoxification.
Followers of Sri Sri Thakur Anukulchandra, commonly known as Satsangees, all over the world take one or two fresh leaves with plenty of water in the morning after morning rituals. This is prescribed by Sri Sri Thakur himself.
'Many reports show the medicinal properties of C. asiatica extract in a wide range of disease conditions, such as diabetic microangiopathy, edema, venous hypertension, and venous insufficiency. The role of C. asiatica extract in the treatment of memory enhancement and other neurodegenerative disorders is also well documented. The first report concerning the antitumor property of C. asiatica extract was on its growth inhibitory effects on the development of solid and ascites tumors, which lead to increased life span of tumor-bearing mice. The authors also suggested the extract directly impeded the DNA synthesis. "In our study, C. asiatica extract showed an obvious dose dependent inhibition of cell proliferation in breast cancer cells.

-Absorption: An animal study found that madecassoside, asiaticoside, Asiatic acid, and madecassic acid have a bioavailability between 30 and 50%.
-Distribution: Bosse et al. reported that peak plasma levels are reached 2-4 hours after oral ingestion, intramuscular injection, or topical application of Madecassol, a gotu kola preparation. Grimaldi et al. also found no difference in time to peak plasma concentration with different dosages or single versus chronic dosing in a crossover study of the total triterpenic fraction of Centella asiatica (TTFCA). The area under the curve significantly increased in a dose-dependent fashion after single doses of either 30mg or 60mg TTFCA in humans.
After chronic treatment for seven days with either 30mg or 60mg TTFCA twice daily, it was observed that peak plasma concentrations, AUC0-24, and half-life were significantly higher than after single dose administration, possibly explained by the fact that asiaticoside is transformed into asiatic acid in vivo.
-Metabolism: A study in 12 healthy volunteers found that asiaticoside is converted to asiatic acid in vivo by hydrolytic cleavage of the sugar moiety.
-Elimination: Madecassol is predominantly eliminated in the feces within 24-76 hours after ingestion, injection, or application, with a small unspecified amount metabolized by the kidneys.
Edited and posted by Hồ Đình Hải
References
1-http://en.wikipedia.org/wiki/Centella_asiatica
2-http://www.motherherbs.com/centella-asiatica-extract.html
3-http://www.ncbi.nlm.nih.gov/pmc/articles/PMC1513148/
4-http://www.sciencedirect.com/science/article/pii/S0896844608003744
5-http://www.sigmaaldrich.com/life-science/nutrition-research/learning-center/plant-profiler/centella-asiatica.html
Được đăng bởi Kỹ sư Hồ Đình Hải vào lúc Friday, May 18, 2012

TRANSLATE INTO YOUR LANGUAGE

THE MOST COMMON TITLES ARE READ

LET READ ON MY BLOGS

FIND ALL TITLES ON THIS BLOG